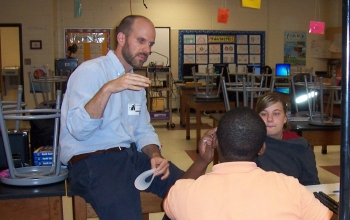 Water resources management involves many often distinct fields, such as hydrology, engineering, economics, public policy, chemistry, ecology, and agriculture, among others. It is a multidisciplinary field, each with its own set of challenges and, in turn, its own set of computational models.

Jonathan Goodall’s mission is “to take all these patterns from different groups and glue them together somehow,” he says.

The National Science Foundation (NSF)-funded scientist and associate professor of civil and environmental engineering at the University of Virginia is working to design an integrated computer modeling system that will seamlessly connect all the different models, allowing all people involved in water resources to see the big picture.

“We’re trying to computationally design models as components within a larger modeling framework so that we can integrate them,” he says. “We want to be able to look at the connections between the systems. For example, if you grow corn for ethanol as a fuel, there are economic, water quality, and agricultural aspects. How do you envision issues and problems holistically? How to look at all the components of the system and their interactions? We need to have that perspective if we want to understand all of the consequences that occur on water, so that we can manage it properly.”

In doing so, “it will make the models we use to address water resource challenges more accurate and more robust,” he says. “There are many current water challenges that require sophisticated computer models.”

Goodall lists, among others, the Chesapeake Bay and the Gulf of Mexico, where fertilizer runoff has created dead zones; Southern California, which faces water shortages resulting from over-allocation of the Colorado River and depleting groundwater resources; and flooding along rivers in the Midwest, which has led to tough decisions about releasing water through withdrawals and flooding land to avoid major flooding downstream of cities, such as New Orleans.

“Water resources engineers use models every day to make predictions, such as when a river will crest after a heavy rainstorm or how long before a city’s water supply runs out. exhausted during a drought,” he added. “One of the problems with our current models is that they often only consider isolated parts of the water cycle. Our work argues that when you look at all the parts together you will get a more complete picture which will result more accurate predictions.”

His work was motivated by and builds on a European Union-funded initiative called the Open Modeling Interface, known as OpenMI, originally designed to facilitate the simulation of interactive processes, especially environmental ones, by allowing independent computer models to exchange data during their execution.

Later it became a generic solution to the problem of exchanging data between all models, not just environmental, and soon after, not just models but software components, thus connecting any combination of models, databases and analysis and visualization tools.

“When models are bridged, you need to allow for the flexibility that allows for these differences, or else you risk encountering significant computational inefficiencies,” Goodall says.

“Also, you can quickly get into semantic issues, where different models have different vocabularies in their internal systems,” he adds. “You may need to pass a variable between two different models, but each model can have its own semantics for naming the variable. Computers don’t handle this well without very specific implementations, such as a unified and controlled vocabulary or clear rules on how to translate terminology between the two models.”

These semantic differences can be complex, as model variables can have slight differences in units or dimensions that, if not properly managed, can cause major problems when linking models, he says.

While this work generally applies to all water resource modeling challenges, Goodall and his team apply the work specifically to the challenge of modeling water and nutrient transport in watersheds. They use the Neuse River Basin in North Carolina as a case study, running widely used models alongside their new modeling framework system to test and verify if the new system achieves the same responses as well-tested models. .

“The modeling framework system will then be used to go beyond the capabilities of current models by including new disciplines in the watershed modeling process, and then possibly enabling specialist groups to advance components of the global modeling,” he says.

Goodall conducts his research as part of an NSF Faculty Early Career Development (CAREER) award, which he received in 2009 as part of the NSF’s American Recovery and Reinvestment Act. The award supports junior faculty who exemplify the role of teacher-researchers through outstanding research, excellent education, and the integration of education and research within the context of their organization’s mission. NSF is funding his work with $408,042 over five years.

Goodall is using the educational component of the grant to plan classes, as well as a workshop for graduate students from different water-related disciplines who will “present an interdisciplinary water problem and then build a model using the new modeling system that can really test our approach,” he says. “We’ll talk about the integration we need to do to have an integrated system where each person brings their own component.

In 2013, Goodall volunteered as a mentor at a local college, where he guided students in designing a city of the future and “thinking specifically about how this city would manage its stormwater,” says -he. “We discussed the general issues caused by stormwater, that is, runoff caused by heavy rain, that falls on impermeable surfaces such as roads, roofs and parking lots.

“Because this rain does not seep into the ground, it can cause problems like flooding or the erosion of riverbeds,” he adds. “We talked about how engineers manage stormwater so it doesn’t cause these problems, as well as how the philosophy of stormwater management has changed over the years.”

While many urban stormwater systems were designed in the past simply to drain rainwater from a city as quickly as possible – for example, using large concrete channels – the goal has changed these last years. Many cities are now employing new practices, such as using permeable surfaces for roads or land, or capturing rainfall in ponds or rain gardens spread throughout the city, allowing water to drain away. slowly infiltrate into the soil.

“Stormwater is something most people spend very little time thinking about and these students were no different,” he says. “But as they started to think about the problem and the challenge of not just solving the problem, but of doing it in a sustainable way, they were hooked. You could see their minds racing as they tried to come up with solutions. solutions to the problem, and it was fun.”