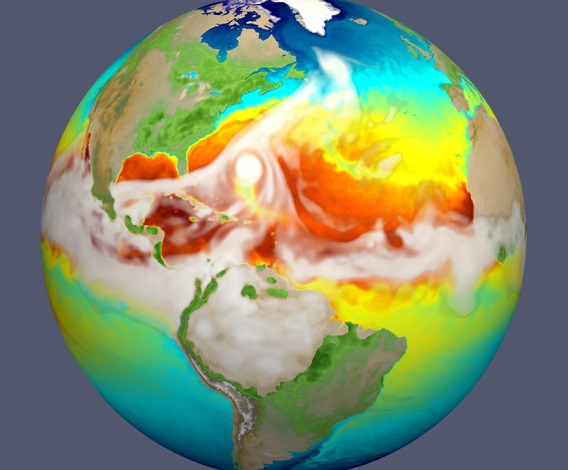 After four years of development, the U.S. Department of Energy (DOE) releases the Energy Exascale Earth System Model (E3SM), a computational platform for performing high-resolution simulation of weather and other earth systems .

ES3M is described as “the first end-to-end multi-scale Earth system model” coupling simulations of the atmosphere, land and ocean (including sea ice). As such, it will provide predictions of how these different elements interact. The software will also be used to study the interaction between human activities and natural processes. In particular, ES3M can model the impact of human-induced global climate change on different Earth systems.

Simulation of sea surface temperatures during the passage of a hurricane in the Atlantic.

Sure, the DOE has had Earth system models in the past, but E3SM supports more complex simulations and runs them at higher resolutions. To do this, it is designed to take advantage of the greater computing power of exascale systems. All of this helps answer more specific questions on topics like droughts, sea level rise, hurricane intensity, and ocean circulation. The reason this is important to the DOE is that all of these processes will have a profound effect on energy needs, as well as the production of solar, wind, and hydroelectric resources.

“This model adds a much more complete representation between the interactions of the energy system and the Earth system,” explained David Bader, scientist at Lawrence Livermore National Laboratory (LLNL) and leader of the E3SM project. “The increased computing power allows us to add more detail to processes and interactions, resulting in more accurate and useful simulations than previous models.”

At this point, ES3M runs on pre-exascale DOE supercomputers, but the software promises to show its true value once the exascale machines become available. The first such system, Aurora, is expected to be deployed at Argonne National Laboratory in 2021. Between 2022 and 2023, at least two more DOE exascale supercomputers are expected to come online.

“Today, one of our biggest successes is the performance of the model on exascale computer prototypes, where, on a per-node basis, the model runs faster and uses less power than on conventional architectures,” explained Mark Taylor, chief computational scientist for ES3M at Sandia National Laboratories. “This is due to our work in scalability, vectoring, threading and software engineering.”

According to Todd Ringler of the Los Alamos National Lab, there are plenty of problems to solve. The Los Alamos team focused on the danger of abrupt sea level rise due to widespread melting of sea and land ice. “Take the Arctic, for example,” Ringler said. “This is changing rapidly and it presents new opportunities and new security risks. This new modeling capability, in particular the new approaches we have developed for ocean and sea ice systems, will be essential in predicting the how, when and why of the Arctic’s evolution.

Softwares, which is maintained as a GitHub project, includes code, documentation, and output for an initial set of benchmarks. For detailed information on the model and associated simulation tools, as well as future research directions, see the E3SM website.