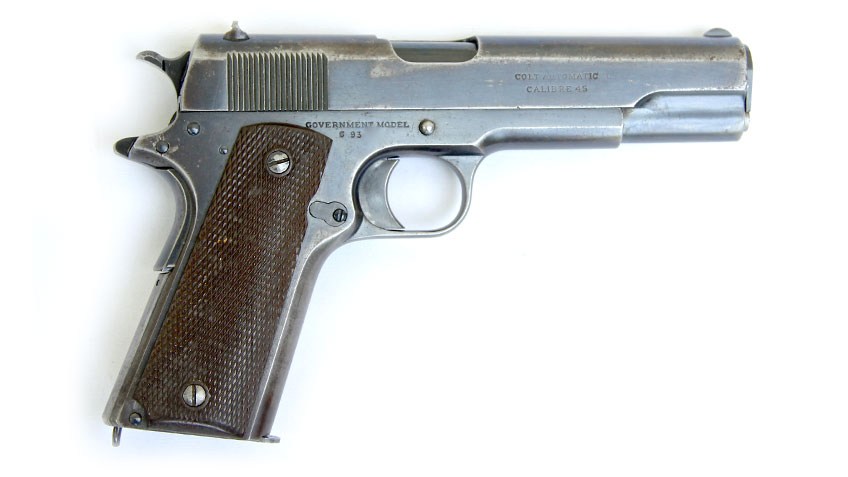 I have this old gun: Colt Commercial Model 1911

Over the years, countless articles have been written advertising the many attributes of the US Model of 1911 pistol. But the main focus has been on the military versions of this slab-sided workhorse. There was also a civilian counterpart to the M1911, and although not as widely produced, it represents an important variation. In fact, just over 336,000 were made before the advent of the 70 series (compared to the 2.7 million M1911s made for Uncle Sam).

Referred to both as the “Commercial Model” or in Colt’s catalogs as the “Government Model”, the civilian version of the M1911 was introduced in 1912 with a series of 1,899 guns. By 1916, annual production of commercial models had grown to 47,400, a clear indication of the pistol’s non-military popularity for home defense and recreational shooting. The business model has also found favor with various law enforcement agencies, including the Texas Rangers and the US Border Patrol.

Unlike the coarser bluing of military M1911s (changed to Parkerizing during World War II), civilian versions sported a highly polished and shiny blue. Of course, when the M1911A1 introduced new features in 1924, those modifications also migrated to the commercial model. Also, until 1950, around serial number 240,000, civilian model serial numbers had a “C” prefix. In 1950, around serial number 240288, the “C” became a suffix until 1970 when it was dropped altogether, with the start of “Series 70” 1911A1.

There was no “United States Property” stamped on the commercial guns, which were initially stamped “Government Model” on the right side of the frame above the serial number. After 1938, this stamping was moved to the slide. In comparison, military weapons were stamped “U.S. Army Model of 1911” on the right side of the slide. Commercial weapons simply had “Colt Automatic, Caliber 45” in this area. The left side of the slide on early military and civilian versions was stamped with a two-line patent date.

This commercial model was one of 50 pistols shipped to Baker, Hamilton & Pacific Co. in San Francisco, California, in 1917. Although it lacks its original diamond-checkered stocks, it retains its magazine two-tone, the markings are crisp, and in 75% condition, they’re worth between $2,000 and $2,250.